Let us begin this post with an ilustrative picture. 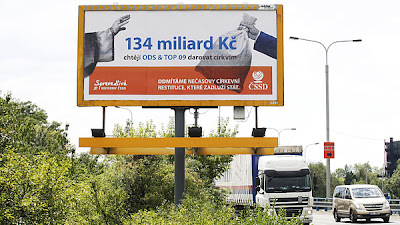 This poster depicts a right-wing politian giving 134 billion CZK (roughly 5,4 billion EUR) to a Christian Priest. In Czech language "miliarda" means a billion. The poster names the two Czech governing right-wing parties and explicitly says that these two want to give 5,4 billion EUR to the Churches. It actually uses the word "darovat", which is one of Czech words for "give", but usually used in birthday present situations, implying there is no other basis for the gift other than an affection for the person in question. Then it says "We refuse the Church restitution that create the debt of the state". The whole thing is signed by the logo of the Czech prominent left-wing party - the social democrats.

So, what is this whole thing about? In 1946 elections, 38 percent of our Czech nation thought it would be a good idea if we had a Communist government. Which we unfortunately had. For the next 40 years. A brief recount of the consequences could be found here. More details provide other Wikipedia articles, such as Economy of Cummunist Czechoslovakia and Religion in Czechoslovakia. In short, most of the private and Church property was stolen to become the property of the Czechoslovakian state. In Communist newspeak, the property was "nationalized".

The post-communist Czechoslovakia and The Czech Republic have managed to return most of the property to the families of the pre-1948 owners or to compensate them. With one exception this country haven't yet found a courage to deal with - the Christian Churches. And that's exactly what's on the table in our Parliament and what is a subject to numerous heated discussion across the country. The picture I have included into this post illustrates how much was the topic hi-jacked and twisted for the purposes of political campaigns. 5,4 billion EUR is a compensation for all property that is no longer available to be returned. By no means is this a present the government wants to give to the Churches, because it loves them as the poster suggests. The question as such is much more complicated and includes a financing model for Churches which eliminates national financing of Church salaries post 2030.

If you are interested in more information or articles on this topic, I would recommend this one. Or simply using Google search for "Czech Church restitution". There is a lot of it out there and most of the articles are not older than few weeks.

The relationship between the people and the Church has always been complicated in these lands. Hussite Wars of the 15th century is one of the examples in which this nation was not in exactly friendly mood. There is nothing surprising about the intensity of the debate ignited by the proposed restitution.

There is also nothing surprising about this topic invading the Czech pagan internet. Pagans like to bash Christians for various reasons. I don't believe this is a Czech speciality. I would even dare to say that the debates on this in The Czech Republic have so far been more reasonable than in other parts of the world, judging on the basis of books by some American authors (notably Starhawk and Raymond Buckland) and by articles on the internet. I suspect if Starhawk ever lived in this country, she would probably have shredded the Church Restitutions to pieces, because all the property originally belonged to the Witches in the first place. Right? Well, there is a bit of truth in that, I think. But one would hardly expect this to appear in a serious debate. Well, one would be wrong. I have recently seen quite a lot of bashing of Christianity in some of the areas of the Czech pagan internet world and the debate on the Church Restitutions seem to provide lots of efficient fuel to this phenomena.

The debate in the Czech pagan community resembles the billboard in the beginning of this post quite well. It is not mostly about various aspects of the whole process, but it seems to be also hi-jacked and twisted - mostly to serve either the anti-Christian agenda or the classical games of "who is better pagan". The general concern seem to based on morality principles and moral aspects of the history of the Catholic Church in this country. To be fair, many of them seem quite legitimate to me. Too many places one would consider sacred to the Old Gods have been plagued by Christian buildings or just crosses. Too many people suffered in the name of the Christian God and too many cultures were destroyed for the sake of "the one true God". Who would ever compensate them? Who would give me back the mythologies and traditions of my ancestors or compensate me for being robbed of them? I myself agree with the ethical dimension of those arguments. And I can see why they are so attractive. In the same time I find them very short-sighted. And I disagree with an assumption that pagans that have no principal problem with Church restitutions are not real pagans. That's something I consider to be very childish.

One of the parts of the legislative "package" seem to be a steady reduction of state financial support of the Churches. This suppoort is currently about 1,4 billion CZK (56 million EUR) per anuum. I have to say, I like this idea of the reduction, with the prospect of the end of the support in about 2030. I am all for the secular state. The less dealing between the state and the Church, the better as far as I am concerned. Quite frankly, after 20 years when I hear the Czech cardinal speaking bad about homosexuals, I can say to myself - I don't pay this guy from my taxes anymore, so whatever he says does not concern me in the slightest.

The most important aspect for me however is the dimension of legal culture. I believe that returning the property implies that what Communists did was an act of theft and confirms it as such. I believe that returning what was once stolen and a fair and transparent application of the law (even un-popular) is an inherent principle of the western culture. It is this western way of legal culture and democracy that allows me to worship and express myself as I want. Even though it maybe laughable to the majority. And this principles are so dear to me that returning the property to the Church is a very small price to pay indeed. Not returning the property or compensating for it because the subject in question is a Catholic Church would mean that legal culture has lost the battle, communist theft was a legitimate act of "nationalization" and our situation is not that different from the one in the Communist era. Or the one that just put Pussy Riot in jail. That would be a sad day for me.

Of course the law might not be perfect. Indeed I have written my opinion only based on the moral and emotional dimension. That seems to be main level on which the discussion in the pagan community takes place. Since I am neither a lawyer nor an expert I would leave it at that.