One of the Fragments - The Czech Pagan Society

Referring to some older articles of this blog is slowly becoming a habit, so I am going to do that again. One of the first blog posts described the Czech Pagan community as fragmented and did so in a positive manner. At least as far as I can tell. One of the best things about this fragmentation is that there is no standard or requirement of what a pagan group should look like and therefore there is quite a lot of variety and freedom. My wishful thinking in this blog post is the wish to be able to describe various parts (fragments) of the Czech pagan community. It's only a half-way whish though, because such ability would imply being a qualified and objective person, willingness to work with many various groups and to spend time with them and to very much care about the whole picture. My lazy way out is simply to describe what I am familiar with and that is an organization called The Czech Pagan Society and maybe some other day.... groups that are in some way related to it. However there is a problem of an obvious lack of objectivity here.

I had a long period of unwillingess to do anything in the Pagan public area, some time between 2007-2011. A few years before this era I mostly started to do this stuff for the simple reason that there was nothing like that available for myself. The nice bunch of people that got together during BMWC events (more about these in some other blog post, not sure if it is that interesting) and similar links eventually started to work under the PFI umbrella and things were looking promising. So I was quite happy to put energy into my life instead and became a happy visitor of events and a passive supporter. After a few years this bunch of people decided to continue doing their thing outside the PFI umbrella again (January 2012) and they eventually picked me up to the team for some reason. So that's why I have the chance to watch things quite closely now. Therefore I am not talking from an objective position, because I am the part of this thing from the very start. Yet I am also not the driving force or the one who makes decisions at the moment, so hopefully there is still enough distance to see the drawbacks and future pitfalls. One may even consider this blog post being a bit of a PR. Well, I think it is in some way.

So, how would I describe this organization? It is supposed to provide a platform for people of various pagan paths or interests who have the need to meet new people, are open to sharing, learning from each other and have good time while doing so. It's focused on doing things. This involves events in nature, public rituals, workshops, pub-moots and similar events. The main objective is to provide space for people to socialize, get to know each other and find out about various approaches. There is no training program or any spiritual guidance associated with this. There is nothing that could possibly substitute the frameworks of individual paths or schools, such as OBOD.

The group of 13 people that is running it consists of people from various backgrounds, including education (teachers), civil service, military, information technologies and others. It has got a long history that goes back to 2004 and through many obstacles I think it settled down and works on a very simple basic principles. These came naturally through learning by doing.

One of the key aspects is that the organization tries to be civil, deliberatley avoiding the pagan stereotypes of the "unemployed hippy", "gothic/vampire special snowflake", "esoteric new ager", "ultra-conservative nationalist" and few others. The common sense is something that wasn't always with this group, but now it seems to be one of the things that stays and doesn't go away. I think it gradually became an essential basis that will become stronger as the people will grow older and older. Since I am well over 30 myself, the civil and modest approach is something I appretiate very much. From my point of view it is also nicely balanced by love for life, enjoyment, fun, and hilarity. Any environment where I can be a human being in the first place is a good one for me. 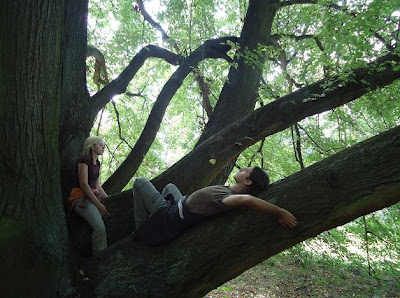 Another important aspect is the openness to various paths and paradigms. At least as long as they are sincere and non-agressive. This brings a diversity. Something I like as well. The whole thing was started by druids from ADF and OBOD together with ecclectics and initiated Wiccans. Groups/paths that have parallels, but have known issues or disagreements between each other as well. One of the reasons this is very healthy for an organisation like The Czech Pagan Society is the moderation it brings. The moderation I talk about is the fact that people mostly keep their religious paradigms to themselves, don't play the "who is better pagan" games. This creates a safe environment into which people of different paths and even people new to Paganism may feel welcome. Not because others agree with them, but because others don't need everyone else to agree with themselves either. That's something one does not see very often in countries that used to belong to the 'Eastern Block' and not everyone is able to see how this works and why it is a healthy way. Certainly it is not an aspect that is flawlessly kept, there certainly are exeptions, but the general direction seems clear to me. I am happy that this laid back approach is there in some form.

This leads me to another layer and that is the lack of religious paradigm and content overall. Which means that in essence The Czech Pagan Society is a "secular", non-religious organization. That is something that could be very much debatable, yet again I would mention it as one of the positive aspects. The Czech Pagan Society even goes that far as not having any ethical codex or declaration of believe. No "As you harm none, do what you will", nothing. The closest thing to this is our simple definition of paganism. I believe this makes CPS open to reconstructionist and more ethnic based paths as well as more ecclectic or even borderline traditions (is Wicca pagan or not - good question, right?).

One of the aspects I feel a bit ambivalent about is the way of how the entire thing works internally. There is of course this classic phenomena of "90 percent work being done by 10 percent people" slowly crawling in as it always does, but that's something not suitable for this weblog to be discussed, so I will just leave it at that. The whole structure grew on the basis of friendship, yet there are many questions I ask myself related to the future prospects. Notably the one that is connected to the necessary transformation of a small group in which people know each other on personal basis into a large group that has a strong element of anonymity in it and the role of friendship and links between people slowly diminishes. I don't think there is enough reflection in this area and at the moment the group is not ready to take this step in a conscious manner. Yet this is something that won't happen in a year or two, so there is enough time. Another problem I see here that there is a risk for people not feeling welcome, because they are in some way very different in the sense of social groups. But this is something I am not sure quite of. My uncertainty is both in terms how much this is actually true and how exactly is this bad.

I think the challenge which the Czech Pagan Society faces at the moment is learning how to communicate with it's members and how to enable them contribute to its activities. I can see this interlinked with the previous potential problem. Another aspect is the ability to reach out to others outside of the member base. I can feel quite a few weaknesses in this area and dealing with them won't be a simple matter. The Czech Pagan Society started half a year ago and took a direction which ensures creating a stable and active team in a very short time. Yet there are downsides and potential pitfalls that need to be overcome with proactivity towards the members that want to get more involved.

I feel a strong potential in this organization. I still see risks and ways how it could easily end up in mediocrity, but likely we will see this organization present in many years to come. So far, it has organized few pub-moots, workshops and some weekends in nature with various activities, either serious or just entertaining. I think there has been at least ten events in the first half year and that's not a bad start. There are plans for more and there is a steady flow of inspiration, presence and to some extend... a vision. One can only hope, because I myself can't imagine there isn't a platform like this. It just does not work. There must be an available environment supportive of paganism and witchcraft embracing various paths and  which is based on a common sense and tolerance. In the same time, whenever there would be some controversy in the media, one can easily say... well look, there is this society and it proves that pagans are just normal people, human beings with their families, jobs and daily problems everyone has. Of course, media love schocking issues and more likely depicts religious groups as mostly radical fundamentalist, but it's worth trying and explaining that pagans, druids, wiccans etc. are mostly normal people, pretty much like anyone else. Future might bring these challenges and we should be ready to tackle them.

To conclude I would like to invite the few visitors of my weblog into the galery of photos from our recent events. If you are interested you can find them here. Just click the images and the galeries will show up. More photos are on the Facebook page. That's all for now on this topic. I think I will write more in the future.